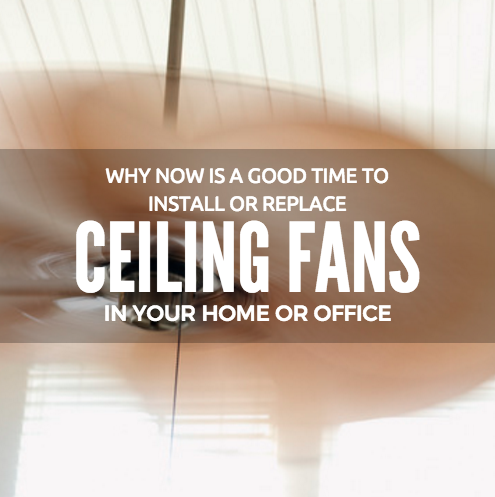 The winter months don’t always evoke images of the heat that a North Texas summer will always bring. That means that some residents or business owners might not be inclined to consider ceiling fan installation as a way of reducing energy costs that often see a considerable jump during that torrid part of the year.

This sort of philosophy is something that J&B Electrical Services has encountered on a regular basis since starting up our business in 2008, and working for years within the industry prior to that. We know that staying warm is usually the overriding thought of most people during this time frame. However, there’s a definite value for those consumers when it comes time to decide whether or not to install ceiling fans.

Then again, perhaps someone already has already made the decision to install a ceiling fan and is looking to have it replaced before the heat hovers again near the triple-digit mark. This is a decision that can circumvent any potential bumps along the road when it comes to an aging fan that may conk out before the end of summer.

With everyone’s busy life often preventing them from paying close attention to such seemingly mundane items as the age of a ceiling fan, it’s easy to avoid addressing this issue during the winter months. After all, the fan isn’t in use as much, so the level of concern drops.

The Choices Are Many

For those who haven’t made that jump yet, one of the best reasons to install ceiling fans is that your available considerations aren’t limited to one or two models. The different sizes, styles and colors of all these different types, coupled with the varied lighting options we have available mean that you won’t be forced to settle for a standard issue product.

With respect to lighting, you might prefer the contemporary option or perhaps the transitional or traditional. In addition, our models can be operated by remote control, have their speed adjusted or lights dimmed or even spin in reverse.

Letting the Professionals Take Care of It

While the idea of a do-it-yourself project sounds good when it comes to saving money in this situation, many individuals either don’t have the time or might not be mechanically inclined enough to do the job right. In the latter case, that can lead to potential dangers with any ceiling fan installation.

That’s because ceiling fan wiring obviously involves electricity in allowing the fan to run. Someone not familiar with this can do severe harm to themselves or cause damage to the overall home, which, in the latter case, will require an expensive repair trip by an electrician.

All of that can be avoided by allowing our professionals to set things up. We’ve performed ceiling fan wiring countless times for an untold number of our satisfied customers. That experience and extensive training allows us to make sure that the wiring is set up safely in order to keep things cool once the calendar reaches the summer months.

The dangers of electricity are something we also address in the area of either upgrading or replacing electrical panels. Upgrading panels is related to homes that are looking for the state-of-the-art model. In contrast, replacing is for those homes that are more than 35 years old and likely still have a breaker box, a volatile instrument that could be dangerous.

Ceiling fan installation isn’t usually for the faint of heart and the idea of doing your own ceiling fan wiring could be risky when it comes to your health. Therefore, it makes sense to put your faith in the staff at J&B Electrical Services.

With more than two decades of experience in dealing with the different concerns our customers have when making the decision whether or not to install ceiling fans, we know the ins and outs related to this area. Therefore, there’s no better time than right now to contact us for information on the installation or replacement of your ceiling fan.