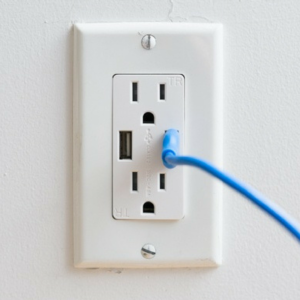 The era of having traditional electrical outlets within a home has long since passed due to the many new technologies that have placed a burden on those valuable components. In their place has been an evolution toward residential electrical outlet upgrades that not only balance the addition of new items but also ratchet up the safety from potential dangers.

Listed below are six different types of upgrades that a residential electrician in Arlington or Mansfield from J&B Electric can handle:

The cost of electricity is a fixed cost that many families try and keep in check. Making an upgrade to LED lighting is something that uses much less energy, but also reduces the need to frequently change bulbs. The latter reason stems from the fact that LED lights can last as long as 20 years, which is exponentially higher than in the past.

At the same time, the level of electricity emitted from each bulb is considerably lower, something that will be reflected on your monthly bill. That makes the original investment made for residential electrician electrical outlet upgrades a worthwhile expense that end up paying for itself.

One annoying aspect of traditional outlets has been the presence of the plugs that might obstruct someone from walking past it or put them in danger from tripping on the extended cords. However, using recessed outlets eliminates such concerns because they’re situated more inside where the previous outlet was, which means that the plug never goes farther than where the surface was in the first place.

One of the first changes that came about when the aforementioned technologies began to establish themselves as a constant presence was the need for things like power strips to accommodate plugs used for adapters and chargers.

One dramatic change in this area that a residential electrician in Arlington and Mansfield now handles is the installation of USB outlets. No longer does someone have to use a plug simply to charge their smartphone or use as an adapter. Instead, devices that require USB have their own specific outlet.

This is a relatively low-cost option that makes sure that if any interruption of a circuit’s electricity, an immediate shutdown of that circuit will take place. This is something that can be an issue after a brief outage that quickly runs the risk of a power surge that can damage or even destroy expensive devices.

A serious issue with some traditional outlets is the prospect of overheating, which can lay the groundwork for damage that can result in costly repairs. Much like the GFCI, the AFCI is set up to quickly discover any marked increase in the temperature of the wiring. Once it’s detected, the outlet is shut down.

Parents of young children have always been concerned about outlets being an attractive nuisance for youngsters, who may try to insert something in there. That’s because of the potentially fatal prospect of those youths either being shocked or inadvertently starting a fire. The design of these receptacles will prevent such a situation from taking place.

Your Best Choice for Upgrades

J&B Electric Services makes it easier to schedule residential electrician electrical outlet upgrades that can save you money and keep you and your family safe. The residential electrician in Arlington or Mansfield that we send will arrive promptly and has undergone extensive training to provide quality service. So contact us today and let’s get the process started.